by Inspire2Aspire By Todd Eisinger

Inside: Hope your day is a big hit!

As in life, the first pitch is just the beginning of the game with so much more to follow. Todd was selected to throw out the first pitch at the Akron Rubber Ducks game on Father’s Day 2016. As the winner of the Carlene Weaver Achievement Award, his actions as a self-advocate bring positive awareness for hose with disabilities in our community. The award was named after the woman who was instrumental in the creation of the Summit County DD nearly 50 years ago.

Another monumental event occurred on this same day… The Cleveland Cavaliers won their first NBA Championship!

The greeting card you are holding exists because people like you helped me achieve my goals. I was motivated to work hard at whatever I did and never give up. I learned to believe in myself and others. Through my cards, I want to help families recognize how many opportunities and great moments they will experience having a person with a developmental disability in their life. Living my life has its challenges, but it’s also a lot of fun!

That’s why my company inspires2aspire.

To learn more about Todd’s adventures, or to share you own, visit: www.inspire2aspire.com

A portion of the profits from the sale of this card will be shared with organizations that support individuals with developmental disabilities.

Todd Eisinger has always wanted to be a good role model. He was given a grant in 2009 to start his greeting card business and by 2010 he had four cards. After the original cards, Todd expanded with one or two new cards each year. On the back of each card is a story about Todd and why the picture and message are important. Todd is involved in every aspect of making his cards and he also enjoys doing personal experiences. He has done shows all over the country. 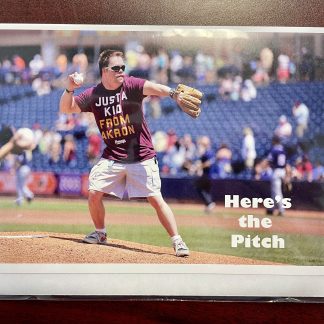